Settle in to listen to a story about a farmer in a possible future and his tug of war with technology. A new podcast from The Overcast brings one of Fairwood member Renee Stern's stories to life.

"A Touch of Frost," originally published in the 2013 anthology Looking Landwards, is narrated and produced by The Overcast's J.S. Arquin.

Posted by Fairwood Writers at 3:49 PM No comments:

Email ThisBlogThis!Share to TwitterShare to FacebookShare to Pinterest
Labels: Listen To Our Work, Read Our Work, Renee Stern

If you're looking for some great new stories to read, check out what our alumni have been up to!


The April issue of Hybrid Fiction is a Fairwood two-fer. First up, a new science-fantasy short from Harold Gross, "Short-Handed," which shares the table of contents with the second part of Rhiannon Held's serialized weird western. "After the Warding" starts here, in the March issue.

If you're interested in reading more of Rhiannon's recent work, take a look at her story, "Truth as a Prize," in Beneath Ceaseless Skies' packed science-fantasy issue in March. And you'll want to pick up the brand-new ebook of her space-opera novella, Clean Install, so you'll be ready for the sequel, Dirty Burnout, coming soon!

We're all cheering for Corry L. Lee's first novel, a fantasy with a Russian-inspired setting, elemental magic and great characters! Weave the Lightning, published earlier this month, is available in trade paperback and ebook. Don't miss it!


And finally, we somehow missed the publication of Kate Alice Marshall's spooky YA novel, Rules for Vanishing, back in the fall--but we might have been the only ones not paying attention, seeing as it was nominated for a Bram Stoker Award for Superior Achievement in a Young Adult Novel! Kate was up against a tough field when the awards were announced this month, but just being nominated is a superior achievement. Congratulations, Kate!
Posted by Fairwood Writers at 10:58 AM No comments:

The Fairwood Writers are taking a new tack to help student writers in grades 3 through 12 prepare for MoPOP's upcoming Write Out Of This World science fiction and fantasy contest.

This year, we're offering young writers the chance to send us their stories, or a section of their work-in-progress, for feedback and coaching on how to improve their entries before they submit them to the contest. We'll also answer writing questions to help guide them through their writing process.

In previous years, we've led story generation workshops in the run-up to the WOOTW contest. Rather than that single on-site event, our new approach makes us available to student writers through nearly the entire contest period, until January 26, 2020.

You'll find more information about the contest here, and about our coaching and feedback--including an FAQ and some tips on how to use feedback--here. We're looking forward to hearing from all student writers and reading your work for the contest!
Posted by Fairwood Writers at 1:53 PM No comments:

Email ThisBlogThis!Share to TwitterShare to FacebookShare to Pinterest
Labels: MoPOP, Write Out Of This World

Fairwood alum Rhiannon Held, writing as R.Z. Held, has a new story in the latest issue of Beneath Ceaseless Skies. "Swimming Apart" focuses on the bond of friendship, featuring treasure-hunting in underwater caves, and is Rhiannon's second BCS story after last year's "Red Dreams."


Posted by Fairwood Writers at 10:56 AM No comments:

Friend and Fairwood alum John Pitts died on Oct. 3 with too many stories left to tell. We mourn his loss.

As J.A. Pitts, he published the Sara Beauhall urban fantasy series, the second of which, Honeyed Words, won the 2012 Gaylactic Spectrum Award; the other three books made the award's short list. John also published several short stories, including a collection from Fairwood Press, Bravado's House of Blues.

John was devoted to his wife, Kathy, and their children, Patrick and Emily, and was a generous friend, always willing to listen and help where he could. During his time as a Fairwood Writer, he provided encouragement and thoughtful critiques within the group and for our critique workshops at Norwescon and Westercon--and he kept up those contributions even after he left Fairwood, as well as teaching workshops and mentoring several writers.

He is deeply missed.
Posted by Fairwood Writers at 9:59 AM No comments: 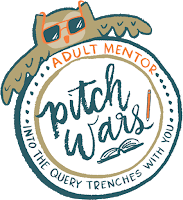 Fairwood Writer Erin A. Tidwell will be a Pitch Wars 2019 mentor. Erin is an alumni of Pitch Wars 2016, and will be co-mentoring in the Adult SFF genre with author Hayley Stone.

They'll be accepting submissions only from September 25 through 27, 2019. Check out Erin and Hayley's Pitch Wars wishlist on Hayley's blog.
Posted by Erin at 9:34 AM No comments:

Check out the new story from Fairwood alum Harold Gross in the newly released anthology, Alternative Truths III: Endgame, the final volume in the Alternative Truths series from B Cubed Press. Harold's story, "Skin in the Game," explores what might happen if our leaders were held a bit more responsible for their decisions, right or wrong, in very permanent ways.


Edited by Bob Brown and Jess Faraday, this anthology offers stories and essays by 30 writers and political thinkers examining some possible outcomes of our political decisions. Among them is a look, in Paula Hammond's "Fortunate Son," at a Donald Trump who answered his country's call to serve in Vietnam.

Part of the anthology's proceeds are donated to the ACLU of Washington. Pick up the ebook or paperback today!

Find out more about Harold's writing at http://literaryends.com/hgblog/writing/.
Posted by Fairwood Writers at 2:02 PM No comments: